Where did coffee beans originate? 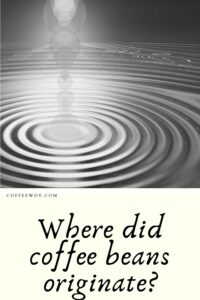 In the last 1000 years, coffee became one of the most popular drinks and part of everyday social life. The drink started the journey in Arabia, and today it can be found in every corner of the earth. So where did coffee beans originate?

Origin of the name and plant

There are several assumptions about when we began using coffee as a drink, and almost every story contains elements of legend.

To answer the question ‘Where did coffee beans originate?’ it is better to stick to the facts. So let’s begin.

Path of the coffee

In the 9th century, coffee found its way from the African plateau, over the Red sea, to Arabia. The coffee that we know today came from Arabia. Somewhere around the year 1000, the process of preparing the coffee from roasted coffee beans began. The drink soon became popular all over Arabia. The center of the coffee trade became the city of Mocha in Yemen. Mocha is still one of the most popular types of coffee.

At the beginning of coffee preparation, the recipe was kept a secret. The breakthrough of coffee towards Europe began with the Ottoman conquests. Turkey’s tradition of preparing and drinking coffee began in the 16th century. At that time in Turkey, the first cafes were open.

Related  Where Do Coffee Beans Come From?

Europe and the New world

Coffee became very popular, very fast. It spread quickly through Europe, starting from the south. In 1570 Venetian merchants brought it to Venice along with tobacco. By 1760. there were over 200 cafes all over Venice. The Turkish march to Vienna in the late 17th century allowed Central Europe to become familiarized with coffee.

Europe’s demand for coffee has become enormous, and it became necessary to expand the area of cultivation. Thanks to French king Luj XIV the coffee came to the Caribbean, and Latin America, from where it spread across the New World.

The last continent that began cultivating coffee was Africa.

Today we have the two most popular types of cultivated coffee-Arabica and Robusta. They belong to the Coffea genus, which has 25 types of coffee. The Arabica and Robusta are the only ones that are being cultivated commercially. Arabica occupies most of the production in the world today. Robusta is less cultivated because of its bitter-sour taste. The leading countries in coffee production today are Brazil, Colombia, Ethiopia, Uganda, Angola, India, and Indonesia.

Through the years, coffee connected various civilizations and all continents. Today, coffee is one of the most common reasons for people to gather and socialize.