How are coffee beans decaffeinated? 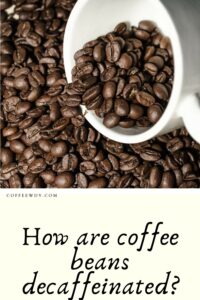 We all have our favorite type of coffee. It is a ritual we enjoy daily and make no compromises when it comes to a perfect cup of this great drink. Some say that true coffee lovers rarely drink decaffeinated coffee. It is because, during the procedure of removing the caffeine, the coffee also loses part or all the flavors.

The trend of decaffeinated coffee originates from Germany, and it dates back to 1820. Nowadays, the US, Germany, and Switzerland are known as the most famous producers of this type of coffee. So how are coffee beans decaffeinated?

How are coffee beans decaffeinated?

There are three methods used to create this product.

In the early 20th century, German chemist Ludwig Raselius, developed the process and made the first decaf coffee. The process uses the steam directed at the grain, which causes it to open, expand, and become porous. Such grains are then exposed to methyl chloride. The caffeine degrades, the grains heath from 104 F up to 158 F and again expose to water steam.

The water method was developed in 1980. The method consists of soaking uncooked grains in water and removing caffeine using carbon filters. The beans soak and rinse up to 10 times until the caffeine level drops to 0.1%. The main disadvantage of this method is that it removes all the flavor from the caffeine. To restore the coffee’s lost taste, all the water in which it was soaked, must be evaporated. This way, the flavors are preserved, excreted, and returned to the well-dried beans by injecting. This technique is slow, but it is safe for health as it does not involve the use of chemicals.

Related  Can Coffee Beans Be Frozen?

The third method will also give us an answer to the question how are coffee beans decaffeinated?

This method is often used in the coffee industry. Carbon dioxide (CO2) or propane is injected into the grain under very high pressure. This method is popular because these gasses remove the caffeine but do not destroy the flavors. Zosel-process was first used in 1905.

What is the Future of Decaffination?

All three methods for removing caffeine from coffee may become unnecessary since a new herbal coffee type has been discovered in Madagascar called Coffea buxifolia. It is a coffee whose beans contain no caffeine at all. So far, it has not been cultivated or commercialized due to its very strong bitterness. Instead of naturally grown decaffeinated coffee, there is a greater chance of genetically modified coffee being produced. Because of its nature and commercial importance, coffee was among the first major subjects in genetic engineering.