Why Does Coffee Make You Pee? 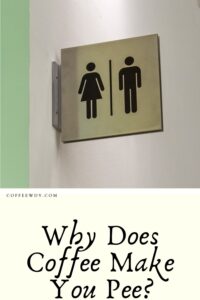 In this article I’ll take an in-depth look at the connection between coffee and urination frequency and explore the scientific research behind this relationship.

So without further ado, let’s just jump straight into it, shall we?

Why Does Coffee Make Me Pee?

To start off, it’s important to note that almost everyone experiences some degree of dehydration when they’re drinking coffee.

This is because it has a diuretic effect on the body, which means that it increases the frequency of urination.

In fact, most caffeine-containing beverages have a diuretic effect, including tea and soft drinks. Why is this?

The exact reason is unknown, but there are a few theories as to why caffeine acts this way.

One theory suggests that urine production may be stimulated by the presence of magnesium ions in coffee (1).

In this case, caffeine would be acting in a way similar to that of magnesium chloride (a diuretic), but without altering magnesium concentrations.

Another explanation for the diuretic effect, and why you pee more, of caffeine is its ability to bind to adenosine receptors (2).

Adenosine is a neuromodulator that plays a role in regulating physiological functions such as sleep, appetite, and pain sensation.

Caffeine binds to these receptors and acts in a similar manner as agonists that activate them, leading to increased urination (3).

It’s All About Water Balance

All in all, there are several mechanisms by which caffeine increases urination frequency. But why is this the case?

Related  How To Grind Coffee Beans Without Grinder? [4 Ways]

The explanation is rather simple; it’s all about overall water balance.

When you drink coffee, your blood plasma levels of caffeine increase, which means that the kidneys start to get rid of excess water in order to maintain homeostasis (4).

As a result, you urinate more frequently in an attempt to balance the proportion of excess water.

Due to the fact that you are drinking coffee, you probably aren’t retaining as much water as usual in the first place, meaning that the effects are more pronounced.

In the end, the reason you pee more after drinking coffee has nothing to do with caffeine per se.

Rather, it’s a consequence of the dehydration caused by excessive urination and the need to return homeostasis.

This is why it’s important to drink plenty of water when consuming coffee, or caffeine-filled beverages, in order to avoid this.

If you do that, then you’ll be well hydrated and will be able to tolerate the increased frequency of urination without adverse effects.

Otherwise, the diuretic effect of coffee can cause headaches, tiredness, and other unpleasant symptoms.

Also, keep in mind that excessive coffee consumption is associated with other health problems as well.

A few tips when drinking coffee

Drink enough water – Water is vital for maintaining overall health and ensuring that the effects seen in this article don’t occur. Drink lots of it!

Don’t drink too much coffee – Excessive consumption of caffeine can lead to both dehydration and withdrawal symptoms. Keep it to a minimum.

Choose decaf – Caffeine can have adverse effects on our health, including increased systolic blood pressure and heart rate.

If you’re sensitive to these effects or want to avoid them, it’s better to go for decaffeinated coffee instead.

As you can see, coffee does increase urination frequency. But is this something that should be concerning?

To a large extent, this depends on the individual person. Some people are just more sensitive to the effects of caffeine and/or diuretics than others, so it may produce more pronounced effects than it would for others.

In addition, individuals’ water balance can vary tremendously depending on their overall hydration levels as well as their body’s water-regulating mechanisms.

I drink a lot of coffee when I’m working on my blog and writing, so it’s not uncommon that I go from morning to night with only stopping once for a pee break.

That being said, I know some people who get thirsty and start peeing every 20-30 minutes when they drink coffee during the day.