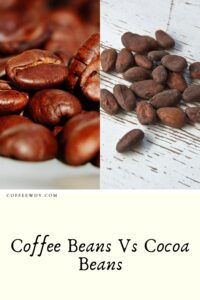 Coffee beans and cocoa beans, two wonderful things that seemingly run the planet. There is no where you and I can go without seeing products that are derived by these beans. Coffee shops, bakeries, grocery stores, restaurants, anywhere that sells food stuffs has both coffee and chocolate. But what about the differences between coffee beans vs cocoa beans? And how are they the same?

Despite that we often refer to these as coffee or cocoa “beans”, both are actually seeds of their respective plants. Coffee beans come from coffee cherries, which like the berries of North America, grow in shrubs and bushes. Cocoa pod plants grow on trees and can vary in color depending on the species. Personally, I think the yellowish Forastero plant looks like a cross between a squash and a football, whereas coffee cherries look like grapes. A single cocoa pod can contain between 30 – 50 individual cocoa beans, but a coffee cherry only contains one or two beans.

Both coffee beans and cocoa beans have to go through a heavy production process before they are ready to be brewed into coffee or baked into chocolate. The outer shell of a coffee bean has no flavor, but more importantly, no caffeine. You could brew a cup of coffee out of them at this stage but they would but there would be no pep in your morning step. A coffee bean needs to be roasted first in order for it to have flavor and caffeine.

Cocoa beans are initially covered in white viscus pulp, that quite frankly, is very visually unappealing, Not to mention, the cocoa beans at this stage literally taste like potatoes. Cocoa beans are dried out and naturally ferment has the pulp dissipates. This changes the bean’s color and taste to a chocolate brown.

Related  Can You Grind Coffee Beans In A Food Processor?

Coffee cherries and cocoa pods can only grow in tropical climates. As such, neither have a specific season of harvest, but rather are harvested year round making them widely available. Nearly half of all coffee cherries are grown in South America and the majority of cocoa pods come from West Africa. But both originated in South America, as cocoa trees are not native to Africa.

Historically speaking, it was the Spanish who introduced coffee and chocolate to the Western world, at least in how we think of coffee and chocolate today. Although Turkish coffee was known in Europe in the early 1600’s, it was a commodity that was hard to come by. The Ottoman sultans would trade processed coffee beans, but the plant itself was considered a state secret. Spanish colonial traders would eventually proliferate the coffee trade.

Chocolate, on the other hand was something Europeans could not get enough off. As British and French colonies became larger in West Africa, they started to bring cocoa trees from South America to be planted on African plantations. This would bolster local colonial economies as well as sate the demand of chocolate in their home countries.

Coffee beans and cocoa beans, which ever way you look at them or compare them, continue to have a history that is just as rich and full as their flavor. Both their possibilities are delightfully endless.

Related  How are coffee beans decaffeinated?

Coffee Beans
← How To Grind Coffee Beans Without Grinder? [4 Ways] ← How are coffee beans decaffeinated?