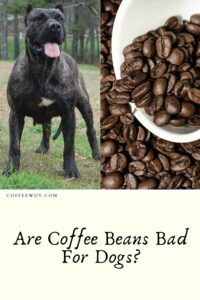 Coffee may be a vital part of our day, but are coffee beans bad for dogs? But what if these two loves cross paths? Well the chemical in coffee that makes us love it is caffeine, and caffeine can cause toxicity to humans in extremely high doses, so imagine what it could do to our much smaller counter parts, our dogs.

Caffeine is a drug, specifically a stimulant drug. Stimulants increase the speed in which messages are sent between our brain and our bodies. This is why it makes us feel more awake when we gulp down that first cup of joe in the mornings. Other stimulants include amphetamines and nicotine.

Caffeine can be found in a myriad of different places, including coffee, tea, energy drinks and soft drink. It can also be known by different names, some of which include methylxanthine, xanthine and guarana.

The odd slurp of highly dilute coffee for a dog is no harm done, concentrated products such as coffee beans or grounds on the other hand have the potential to cause severe toxicity. The effects of caffeine are greatly dependent on size, weight and health, meaning, a smaller dog may be much more effected than a larger dog, however, dogs tend to be much more susceptible to the effects than humans. Symptoms of caffeine toxicity can last up to 12 hours, and sometimes more depending on how much was actually ingested.

What to Look Out For?

It can take just 30 minutes up to a hour for full toxicity to take effect. A pet who has ingested caffeine through coffee beans or other means may show varied sighs including increased blood pressure, heart rate and temperature, vomiting, hyperactivity and restlessness, shaking and eventually seizures and collapse. Worst case scenario may even cause death. It can take just 14 milligrams of caffeine per pound of body weight to cause symptoms in dogs and levels as high as 23 milligrams per pound of body weight can cause cardiotoxicity (Pet MD, 2020)

Related  How are coffee beans decaffeinated?

What to do if Your Dog Ingests Coffee Beans

Call your vet of the pet poisons helpline immediately if a dog has ingested caffeine. If it is soon enough since ingestion, the vet will induce vomiting to expel any caffeine that may still be in the stomach and stop further absorption. If this is not possible, Medication can be given to manage symptoms, in addition to IV fluids to help flush the caffeine out. It can take up to 48 hours for all of the caffeine to be flushed out of the system.

So coffee is a great pick me up for us on one of those slow days, especially a nice, barista brewed cup. For our dogs it is a big no no. The smallest amount for us, can be catastrophic for our furry pals. As a stimulant, coffee speeds up the bodily processes of dogs and can send them in to over drive, even causing death. Unfortunately, the smaller the dog, the more at risk they are. The best thing to do with those enticing coffee beans is to keep them well out of reach of all pets.